Śyāmāśāstri lived in A. D. 1763-1827. Music has been predominantly spiritual in content and orientation. It has attained the status of a yoga.[1] The period between A. D. 1750-1850, three great musician-saints were also inspired composers in South India and enriched classical South Indian music. This type of music is also known as Carnatic music. Śyāmāśāstri was the senior most of them, the other two were Tyāgarāja[2] and Muddusvāmi Dīkṣitar.[3] 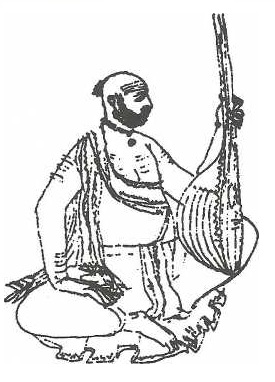 His parents were brāhmaṇas. They were originally from the Telugu country.[4] They were worshipers of goddess Kāmākṣī of Kāñcipuram.[5] From North India, they migrated to Tiruvārur in Tamil Nadu due to the unsettled conditions created by frequent Muslim invasions. They had no issues.

By the grace of Lord Veñkateśvara of Tirupati to whom they were constantly praying, a son was born during A. D. 1763. An oracle had declared that this son would become very famous. He was named Syāmāśāstri. The boy was given very good education in Sanskrit and Telugu languages as the fundamentals of music. He attained proficiency under a musician-monk and Ādiyappan, the most famous singer of those days.

As a result of devoted worship of the goddess Kāmākṣī, he became highly inspired and started spontaneously composing songs of various types. He became an unparalleled expert in that field. Many arrogant musician or detractor of his times were humbled by him in no time. His compositions end with the aṅkita[6] ‘Syāmakṛṣṇa’. He has 300 compositions to his credit. They are, generally speaking, difficult to master. He had two sons. His second son Subbarāyaśāstri was an equally great musician.