Hindupedia needs your support to fund our efforts to remove Racism and Bigotry from Classrooms & Textbooks as well as to fund the translation of Shabdakalpadrumah an encyclopedia written in Sanskrit and thus to expand our content. Please donate generously.

Hindupedia is an online encyclopedia of Sanatana Dharma that is dedicated to spreading authentic knowledge on Sanatana Dharma worldwide. Our mission is to support Hindu scholars and academics regain control of the dialog around Hindu Dharma, and to educate the general public about all aspects of Hinduism ranging from history and philosophy to science and theology. For scholars, academics, and teachers of Hinduism, we provide an:

For the general public, we provide: 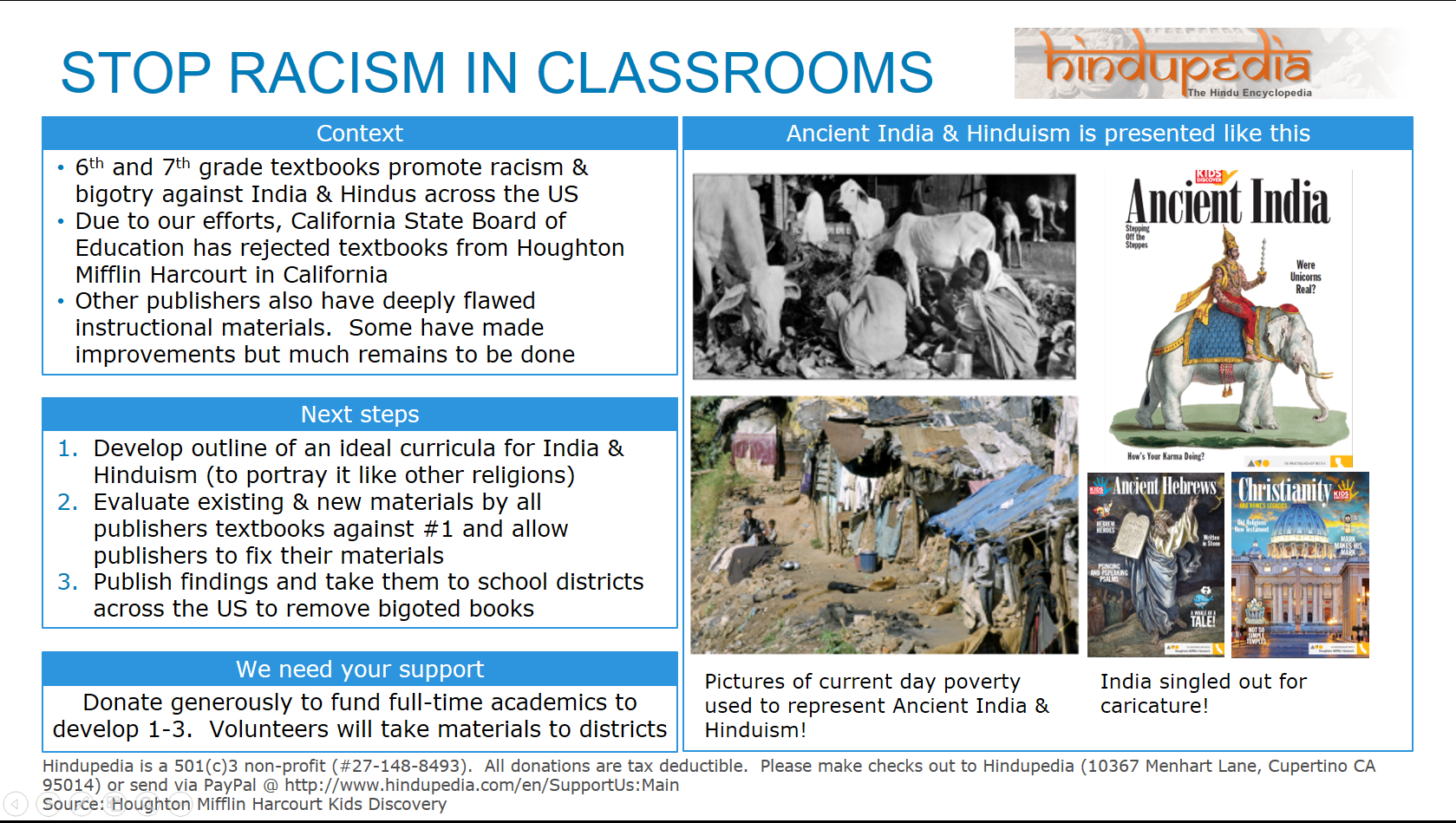 For what we have already accomplished, see Hinduism in California Textbooks

The Shabdakalpadrumah is a well-known and very well respected encyclopedia-cum-dictionary of Hinduism. It presents an authentic Dharma and a practitioner-scholar view (and is not merely a scholarly/literary translation of previous work). It is one of the most comprehensive encyclopedias ever written and for each word, shows the etymology, gender, definition, and synonyms. In addition, the author provides quotations to illustrate the usage and connotation that derive from all the major sources of Sanskrit Literature i.e., Vedas, Vedangas, Vedanta, Nyaya, other Darshanas, Purana-Itihasa, Sangita, Shilpa, Soopakarashastra, Jyotisha, Tantra-Akhyana, Kavya-Alankara-Chhanda Shastras, and Medicine etc. However, it was written in Sanskrit, hard to find, and has never been translated into English. This translation will bring Shabdakalpadrumah back into mainstream and prevent it from being lost.

The sponsor, Raja Radha Kanta Deva Bahadur worked with the best pundits and scholars of his time to assemble this encyclopedia and publish it in 1808.

The encyclopedia is 3,131 pages in length and roughly composed of 2.5M words. While more than a dictionary, it is worthy of comparing it to the Monier-Williams Sanskrit-English dictionary which is the dominant reference work in use today for the study of Sanskrit or Hinduism[1]

Translating Shabdakalpadrumah will provide an authentic reference work for community members, academics and students and help them gain an unbiased understanding of the material they are trying to understand.

The benefits of such a reference work would than go further towards removing bias on all other works in which this text is used as a reference (e.g., if someone were to refer to the translated Shabdakalpadrumah while analyzing another text).

A tangible example of the impact of translating this work can be found by looking at the translations of the following verse attributed to Yajnyavalkya as per both the Monier-Williams dictionary and as per the Shabdakalpadrumah.

To understand the complexity and the cost, the Hindupedia team has gone through a successful PoC of 15 random pages. From POC it has been learned that if the current team size is maintained, the project to translate all 5 volumes (around 2 million words) of the encyclopedia would need 5 years to complete and cost approx $400K.

Our core translation team consists of:

Besides our core project team, we are blessed to receive tremendous support from our highly regraded Sanskrit scholars.