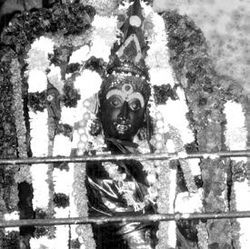 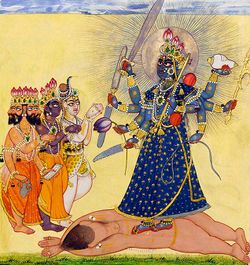 The Kala-Rudra gotra Bhadrakali, implemented in war with the aggressor Asuras.

Bhadrakāli literally means ‘the Auspicious Kālī’. Depending on the scripture, she is referred to an aspect of Pārvati, Durgā, or the female companion of Vīrabhadra.

Worship of God as Mother has been in vogue since ancient times. Out of the several aspects of the Mother Goddess that are still worshiped, an overwhelming majority are the forms of Pārvati or Śakti, the consort of Śiva. Bhadrakālī is also one of them.

Since ‘bhadra’ means auspiciousness, Bhadrakālī is a pleasing deity with a charming appearance. She is depicted as seated on a chariot drawn by four lions. She has eighteen hands in which she carries things such as rosary, trident, sword, shield, bow and arrow, conch, discus, sacrificial ladles, holy water-pot, spear and so on. One of the hands is raised in the gesture of benediction.

The Kālikāpurāna[1] however describes Bhadrakālī as an aspect of Durgā, and as an exceedingly terrible deity.

According to another account Bhadrakālī was the female companion of Vīrabhadra, who was created by Śiva out of a hair from his matted locks to destroy Dakṣa’s sacrifice.