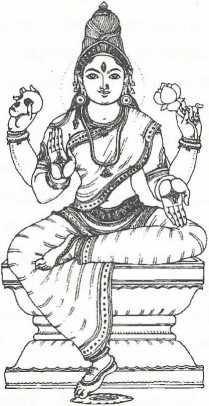 Origin of worship of Śakti or the Divine Mother has been mentioned in the Ambhṛṇīsūkta and the Rātrisūkta of the Ṛgveda.

One of the early basic texts of the Śakti tradition is the Devīmāhātmya (also known as Durgāsaptaśatī or Caṇḍī). Goddess Kālī emanated from the forehead of goddess Śakti. According to Devīmāhātmya, Kālī killed the two demons Caṇḍa and Muṇda. They both were the generals of the demon king Sumbha. Kālī is described as a fierce goddess, black in color, emaciated and wearing the cheetah skin along with severed human heads. Her mouth and tongue were of immense proportions. She could kill troups of demons at one stroke and could swallow several elephants in a gulp.

Cāmuṇḍā is sometimes included in the list of ‘Saptamātṛkās’ or ‘Seven Mothers’, in the place of Nārasiṅhī. She actually symbolizes the power of time in its all-destroying aspect. The word is also spelt as Cāmuṇḍī.