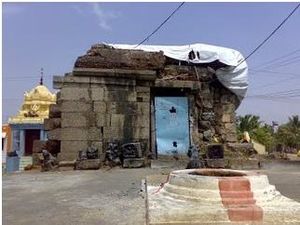 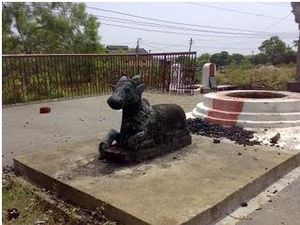 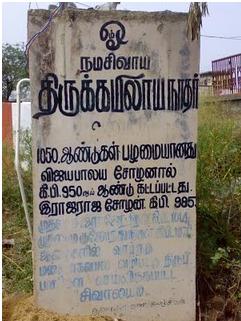 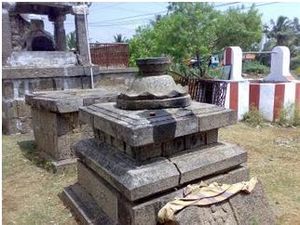 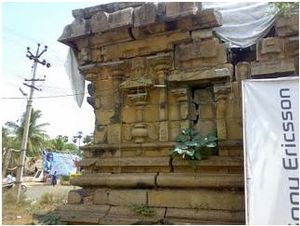 Manimangalam village is located about 10 kms from Tambaram on the western side of Mudichur Road leading towards Padappai.

This village has a very high historic importance because of the huge battle fought here between Narasimhavarma Pallava and the Chalukya King Pulikesi II. This battle was fought in Manimangalam during 7th Century AD.

According to inscriptions, this temple was constructed during 950 AD by a Chozha king called Vijaya Baalaya Chozhan. Later, this temple has been renovated during various periods by Raja Raja Chozhan (985 AD), Rajendra Chozhan (1014 AD) and Kulothunga Chozhan (1070 AD).

One of the 63 Naayanmars called Siru Thonda Naayanar (originally a Chozha Chieftain called Paranjothi) is said to have worshipped the Lord here and also has offered number of Annadhaanams (free feeding) in this holy village.

Now the temple is in complete ruins. This dilapidated temple has been taken care by a trust and Baalalayam is done for re-consecration (Kumbabhishegam) of the temple.

The Moolavar Sannidhi (Sanctum) is facing east and is totally damaged. It looks as if it will crumble down anytime. Though the structure looks so majestic and ancient it’s in a very poor state and needs great attention.

There is a beautiful Nandhi facing the Lord towards the sanctum.

There is also an exquisite Nandhi Mandapam a little away from Nandhigeswarar and facing the sanctum.

Even the roof for the sanctum is open and some PVC sheet is kept as the ceiling to cover the sanctum.

There is a beautiful Peepul tree at one corner of the temple site for which a nice platform is built around.

Many dilapidated idols of Nandhi, Sri Vinayagar and few more are kept in front of the sanctum, the sight of which makes our heart heavy.

Definitely the temple must have had huge properties in this ancient place and is sure to have been encroached by many.

Now a trust called ‘Arulmigu Thirukailayanathar Gnanambigai Educational & Charitable Trust’ is engaged in the service of the Lord by initiating the works towards the Kumbabhishegam.

Someone willing to help or to visit the temple shall contact: