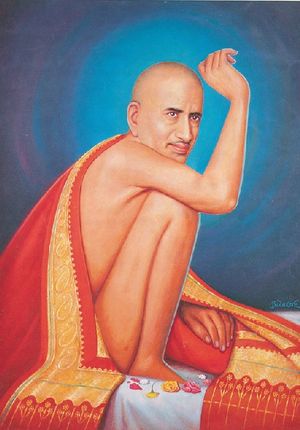 Gajanan Maharaj is prince amongst saints who first appeared in Shegaon on 23rd February 1878. A rich moneylender Bankatlal Agarwal is credited with discovering Maharaj at 12.22 pm while scratching food particles from abandoned patravalis to give credence to the saying that Food is Bhahma and should not be wasted. " Annam Brahmeti " is what Maharaj seemed to have expressed. Maharaj was scantily attired and made gesticulations befitting an insane person. But it is the greatness of Bankatlal who did not consider him as insane and logically argued as to why Maharaj must be scratching food particles when sumptuous food was available nearby in a family celebrating a fertility ritual.