Rāmatīrtha, Svāmi lived in A. D. 1873-1906. He was one of the well-known religious leaders of recent times. He was born in a small village Miraliwala of Punjab, which is now in Pakistan, as the second son of Gosvāmi Hīrānanda. His father was a poor brāhmaṇa priest. His original name was Gosvāmi Tīrtharāi. Rāmatīrtha lost his mother at an early age and was brought up by his elder brother and sister-in-law. Due to his sharp intellect, he got a good education not only in Sanskrit, Urdu and Persian but also in Vedānta, under competent teachers like Dharmārām and Bābā Nagīnsimha Vedī in Gujaranwala. 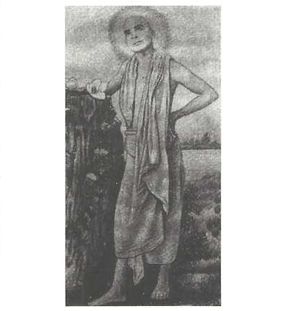 In his twenty third year, he became a professor of mathematics in the Foreman Christian College of Lahore now in Pakistan. Religious by nature and given to contemplation on God, he was deeply influenced by Svāmi Vivekānanda[1] when the latter visited Lahore.

Though married at a young age, he left the family in A. D. 1901 and took sanyāsa[2] assuming the new name Svāmi Rāmatīrtha. After performing severe austerities in the Himalayas he returned to his native place and traveled to Japan and U.S.A. where he lectured on the Vedānta. His pure life, attractive personality and oratory made him quite popular. He wrote a number of articles on the need to attain political freedom. He always stressed two things:

Himself possessing a strong physique he also advocated exercising the body as equally import for spiritual life and service towards mankind. He died by drowning in the river Gaṅgā, probably of his own accord, in A.D. 1906.