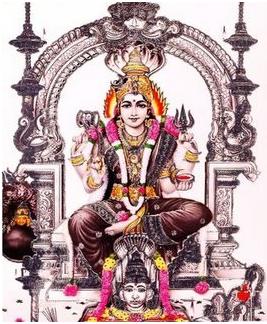 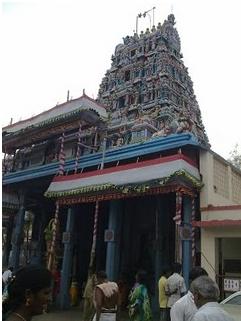 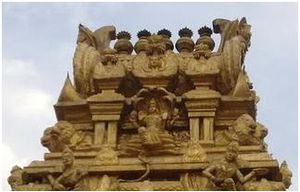 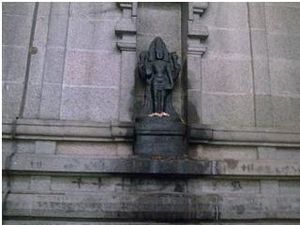 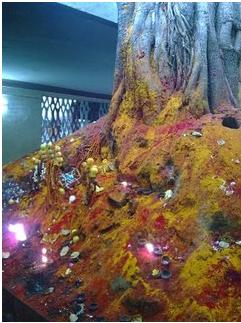 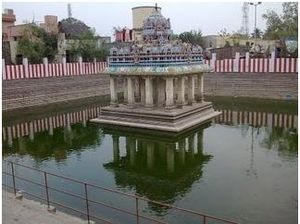 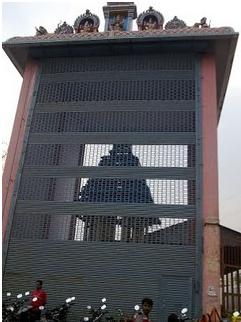 Sri Karumaari Amman temple is situated in Thiruverkaadu. This temple is very popular in Chennai. Apart from this, Thiruverkaadu has also an ancient temple for Lord Shiva called as Sri Vedhapureeswarar temple.

According to the legends, once Sri Karumaari Amman took form of a fortune teller and went to Sun God for predicting his future. Sri Surya Bhagawan neglected Her and Sri Ambaal vanished from his sight, because of which Sun God lost his powers and glory. Then Surya Bhagawan realized that it was none other than the Goddess Herself and came and worshipped her here at Thiruverkaadu, seeking apologies. Goddess pardoned him with mercy and Sri Surya Bhagawan requested her to bless that Sunday (Sun God’s day) be the auspicious day for the Devi here. Goddess obliged him. Also the Sun God spread His rays on the Goddess here during the Thamizh months of Panguni and Purattaasi to show His devotion to the Goddess.

It is said that Sri Vinayagar (Lord Ganesha) worshipped the Goddess here by performing Abhishegam using Valampuri Sanghu (Conch with right twist formation). The Goddess was pleased with His worship and blessed Him and decreed that the poojas at the temple will first be performed to Sri Vinayagar and then only to Her. Sri Vinayagar can be seen present in the temple just as we enter the temple near the Dhwajasthambham (flag staff). While entering the temple, one has to pray to Lord Ganesha and then go further to worship Sri Karumaari Amman.

Once, when the Asuras gave troubles to Devas, they came and worshipped Lord Shiva at Thiruverkaadu, to save them. Lord Shiva called His Devi Sri Verkanni and directed Her to look after His duties till He is back from Devaloka. Lord Shiva gave her the holy ashes from His body and blessed Her. The Goddess asked Sage Agasthiyar to look for a holy place where she can perform the heavenly duties assigned by Lord Shiva. When Sage Agasthiyar was thinking of such a place, he heard an Asareeri (a holy voice) saying that the place where he was standing itself is a holy place. Goddess took abode here as Sri Karumaari Amman and also blessed the place with the importance that one will be removed of all the sins by worshipping Her at Thiruverkaadu.

Thiruverkaadu is the place where all 3 Gods, Brahma, Vishnu and Shiva have worshipped the Goddess. Hence She is called as Sri Karumaari here. Ka means Brahma, Ru means Rudhra or Shiva, and Ma means Vishnu.

The temple here is facing east. There is a beautiful Rajagopuram to enter the temple. Once we enter Sri Vinayagar is seen on an elevated shrine under a tree.

After crossing Sri Vinayagar, the sanctum of Goddess Sri Karumaari Amman is seen. The Goddess is facing east. It is said that originally the Goddess evolved from an ant hill. Amman is so beautiful with a smiling face and decorated well with much flowers.

Sri Subramanyar is found at the praakaaram around the sanctum. Navagrahas are found at the north eastern side of the temple. Sri Brahma is found on one of the walls facing north.

There is another small shrine adjacent to this temple, where a huge ant hill is found under a Peepul tree. Devotees offer milk and eggs for the snakes in this ant hill. Camphors are also lit here to offer worship. The entire ant hill is yellow in color as devotees have applied turmeric powder on it for many generations.

The temple pond is found in front of the temple which is so beautiful with a small Mandapam in the middle.

A tall and beautiful temple Chariot is parked in a separate Mandapam adjacent to the temple.

Thiruverkaadu attracts thousands of devotees and tourists everyday from various parts of the country. Sri Ambaal here is believed to be so powerful granting the wishes of the devotees worshipping her.

Thiruverkaadu is situated about 20 kms from Chennai city which has rail, road and air connections. It lies on the road branching out off Mount Poonamalli Road near Kumananchaavadi.