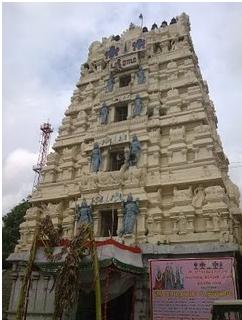 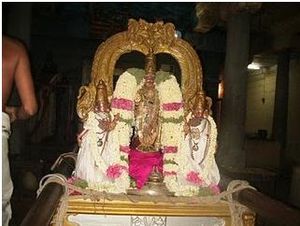 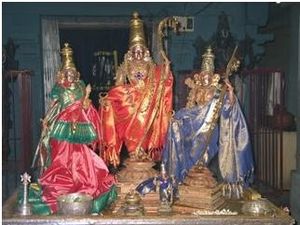 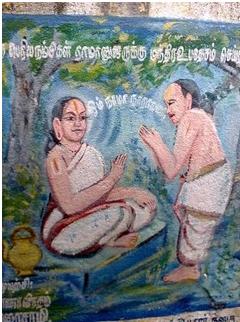 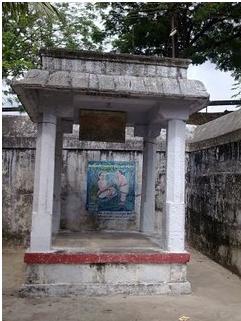 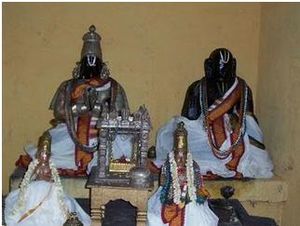 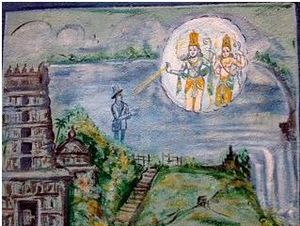 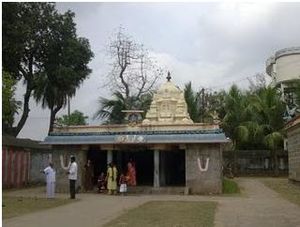 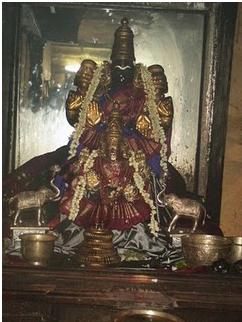 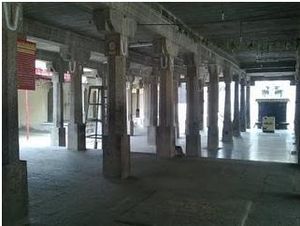 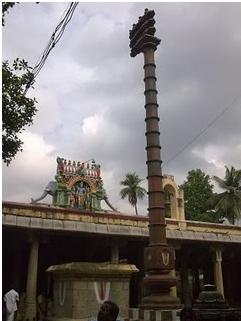 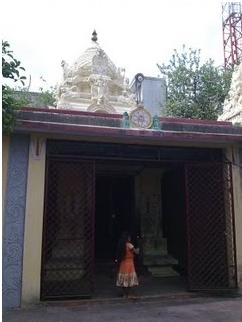 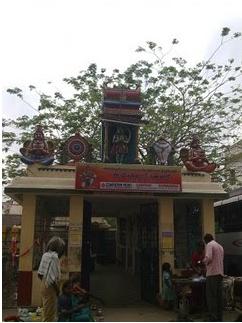 The legend of this temple is connected to Ramayana period itself. There lived an ancient saint called Sri Vipaandakar in Madhuraanthakam, performing penance invoking Lord Vishnu. He was worshipping the moorthies of Sri Karunaakara Perumaal along with Sri Bhu Devi and Sri Neela Devi in this place.

During that period, Sri Rama was sent to the forests where He lost Sri Sita Devi and was going towards Sri Lanka to get her back. Vipaandakar came to know that Sri Rama was moving towards Sri Lanka and had to pass by this forest. Vipaandakar went and invited Sri Rama to his Ashram here and requested Him to stay for sometime before proceeding. Sri Rama accepted Vipaandakar’s request and stayed for a short while and worshipped Sri Karunaakara Perumaal along with the Rishi.

While leaving Madhuraanthakam, Vipaandakar insisted Sri Rama that He should continue the stay for some more periods. Sri Rama told the saint that He was on the mission of defeating Raavana, to bring back Sita Devi and assured him of a long stay and accept the saint’s hospitality on His way back from Lanka.

After killing Raavana, Sri Rama along with Sri Sita and Sri Lakshmana was flying back to Ayodhya on the Pushpaka Vimaanam. As promised to Vipaandakar, Sri Rama stopped on His way at Madhuraanthakam and got down from the Pushpaka Vimaanam. Sage Vipaandakar had a privilege of having the dharshan of the Lord Sri Rama, holding the hands of Sri Sita Devi, like a wedding posture. Sri Rama stayed here in the saint’s place for some days and left for Ayodhya. While leaving, Sri Rama carried Sri Karunaakara Perumaal along with Sri Bhu Devi and Sri Neela Devi with him and was worshipping the Lord at Ayodhya.

Hence, the moolavar Sri Ramar gives dharshan in an unusual yet rare posture holding Sri Sita’s hand. Sri Lakshmana is also present with them. This is probably the only place where Sri Rama is seen in such posture. There are two Urchavars; Sri Sita, Lakshmana Sametha Sri Kothandaramar and Sri Bhu Devi, Sri Neela Devi Sametha Sri Karunaakara Perumaal.

The image of Lord Rama is so beautiful and is said to be the next best to the Sri Rama at Vaduvoor. Sri Rama here is beautiful and charming with an enchanting smile and divine Thejas.

As a coincidence both met here at Madhuraanthakam and Sri Periya Nambigal performed Pancha Samskaaram to Sri Ramanujar under the Magizham tree of this temple.

There is a small Mandapam where Sri Ramanujar undertook Pancha Samskaaram from Sri Periya Nambigal.

There is a separate shrine for Sri Periya Nambigal and Sri Ramanujar here in this temple. This is said to be the only temple where Sri Ramanujar is seen as a Grahastha (married person) and is seen with white clothing instead of saffron, as seen in other temples.

The name of Sri Kothandaramar here came to be popularly known as Eri Kaatha Ramar because of an interesting incident happened during the British rule here. There was a district collector of Chengalpattu by name Colonel Lionel Blaze (some say that his name was ‘Lionel Place’) during the period 1795 - 1798. Madhuraanthakam lake being one of the biggest ones in the district, threatened the residents with the fear of breaching its banks during rainy seasons. The bund of the lake was weak and most of the times the lake overflowed the bund and waters gushed into the village creating disaster to lives.

Blaze who took up charge as collector of the district was worried about the lake during one such rainy season and had visited the village and camped there. He happened to see this beautiful temple and visited it to know more about it. The priests at the temple told him about the history and legend of the temple. While going around in the temple, he found huge pillars and stone slabs piled up in one of the corners of the temple and enquired about the purpose of those slabs. The priests explained that they were meant for the construction of the shrine for Sri Janakavalli Thaayaar and were kept on hold due to lack of funds.

Blaze now told the priests that if Sri Rama protected the village from the lake during the storms of the year, he himself would build the shrine for Sri Janakavalli Thaayaar at his cost. Saying this, he went back in a hurry without even having dharshan of the deities.

Colonel Blaze tried to strengthen the lake bund with his resources but was not confident about the strength of the same. The storms began to show in the village with heavy winds and strong pouring of rains. Rain continued for days together without any signs of stopping. The water began to rise in the lake and one day reached up to the bund level. Blaze expected a calamity to occur. But as the collector of the district, he went out to see the water level of the lake so that he can take some precautionary measures. He took one of his servants with him holding an umbrella and went near the lake.

On seeing the water filled lake, he got worried about handling the calamity which could happen anytime then. While he was thinking worriedly, he watched two young, well built men going around on the banks of the lake with bow and arrows on their hands. He patiently waited and saw these men wandering repeatedly on the banks. As it was night time, he couldn’t figure them out, but pitied them as they were walking on the lake bund during that dangerous night. He turned back to his place as he was already wet but was still thinking of those two strange young men.

The next morning Blaze woke up and saw that the rains had stopped and the sun was shining. Anxious about the status of the lake, he came out and understood that there was no flooding the previous night and the bund withstood all the waters. He was very happy and went rushing to the temple to share the news with the priests. The priests were happy and welcomed him inside the temple. This time, Blaze who was in a relaxed state of mind, peacefully entered the temple and accepted the respects from the temple priests. During that time the sanctum was closed as the Alankaaram (decoration) was going on for the deities.

Once the doors of the sanctum opened, Blaze was shocked to see the same two young men who were wandering with bow and arrows the previous night along the lake bund, being worshipped. He couldn’t control himself and explained to the priests what he saw the previous night. The priests were quite happy to hear him and everyone realized that those two young men whom Blaze saw, were Sri Rama and Sri Lakshmana and presumably it were these who had saved the village from the threatening lake.

An inscription is still found in the temple revealing that the Thaayaar shrine was built by Colonel Lionel Blaze of East India Company, the then district collector of Chengalpattu.

The temple is facing east with Sri Kothandaraamar as the main deity. There is a beautiful Mandapam outside the sanctum with lots of pillars allowing cool breeze into the temple.

In the Mandapam adjacent to the sanctum, there is a secret underground channel which starts from the Madhuraanthakam lake and passes through the temple and reaches the temple pond.

The outer praakaaram has a majestic Dhwajasthambham, adding beauty to the temple.

On entering the temple, Sri Chakkarathaazhwar shrine is found on the left hand side facing north.

The Sthala Viruksham ‘Magizha Maram’ is found on the north western side of the temple.

There is a separate shrine for Sri Vishvaksenar on the outer praakaaram facing south.

Sri Narasimhar gives dharshan at the north eastern side of the temple, facing towards south.

Lots of stone inscriptions are found along the walls of the temple.

The temple pond is found in front of the temple and is called Sri Rama Theertham.

The temple has two main festivals. One is Sri Rama Navami and the other is the Brammothsavam during the Thamizh month of Aani on the day of Moolam star.

Madhuraanthakam is a beautiful place located about 75 kms south of Chennai. While traveling from Chennai on the GST Road towards Trichy, Madhuraanthakam lies after crossing Chengalpattu.