Rāṇi Rāsamaṇi lived in A. D. 1793-1861. Rāṇī Rāsamaṇi was the intrepid lady who prepared the stage for the unfoldment of the wonderful drama of Rāmakṛṣṇa’s life. Born in September 1793, to humble parents in the village Konā, she was married at the age of ten to Rājcandra, the younger son of a very rich land-lord, residing at Calcutta. The already rich family of Rājcandra became richer by the entry of the lucky girl. With her abundant courage and commonsense, she was of a great help to her husband in managing his estates. 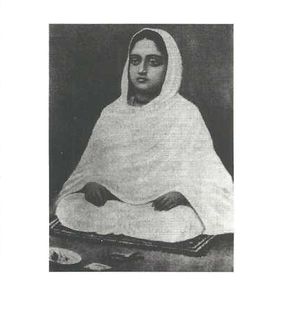 When Rājcandra died prematurely, the Rāṇī took over the entire property herself and managed it very well with the assistance of her able son-in-law, Mathurānāth Biśvās.[1] On many occasions she gave a tough fight not only to the East India Company which was ruling Bengal at that time but also to other rich landlords who were exploiting the poor. She built the temple campus at Dakṣiṇeśvar after being commanded to do so by the Mother Kālī herself. Her close contact with Rāmakṛṣṇa convinced her of his being an incarnation. His unique solution to the problem of the broken image of Rādhākānta[2] made her discover his true greatness. She passed out of the earthly frame into eternity on the 19th February 1861 with the name of the Divine Mother on her lips.