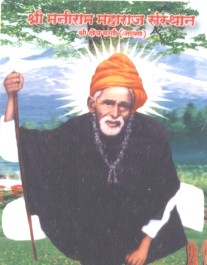 It is very difficult to write anything about the Great Saint Maniram Baba. "Yatra wacha nivartante buddhen manasa saha" One's mind, intelligence and the power of speech is impossible to reach to the stage where 'Atmadnyani' saints could be described.

Why all great saints would visit Maniram Baba's place is a difficult to understand for we ordinary lay men. The great saint Shri Gajanan Maharaj of Shegaon, siddha purush of Jodmoha saint Khateshwar Maharaj and so many other saints visited Baggi to meet Maniram Maharaj. Baggi is the place in Chandur Railway Taluka in Amravati district of Maharashtra State. Sant Maniram Baba entered samadhi in the year 1915, however, nothing is known about his birth and the place. It was guessed by the people that he was Kanya Kubja Brahmin of Uttar Pradesh. Why he chose Baggi to be his place for living is unknown. He entered Baggi and asked for a room for living. One Ramji was enough fortunate that he could provide accommodation to Sant Maniram Maharaj. Ramji became ardent devotee of maharaj and he then became saint himself after the anugrah (reward) from maharaj.

After coming to Baggi he worked with a rich man as a servant keeping his cows. However, soon the rich man came to know that Maniram was not an ordinary man.

Once so happened that somebody reported to rich man that Maniram do not care for the cows and let them graze; he sits below a tree reading a holy book. Rich man got annoyed and caught Maniram red handed reading the book. He thrown the book in to nearby stream full of water.

Maniram rushed and brought the book from the river. Surprizingly there was not even a drop of water attached to book and the book was not wet at all. This opened the eyes of rich man and in place of employer, he became the devotee of maharaj.

Maniram would stay in the river water for days to gather without food. Many insects and fishes would literally eat his flesh but he was not aware. He look at the Sun from morning till evening without taking away eye from the Sun. Many people have found him many times in Khand Yoga, i.e. he looked to be divided into pieces. Many such yoga ordeals are described in the biography.

The present author has confirmed these fact from his own Guru who was contemporary.

People saw him at many places at the same time. He was a miraculous saint. He cured many people from the diseases like leprosy, he solved the family problems of many people. People saw him reviving the dead animals like dog.