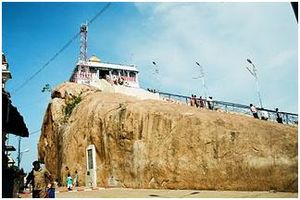 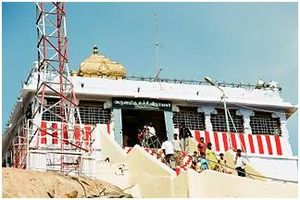 Tiruchirappalli, was earlier known as Thirisirapuram, as a Rakshasa called Thirisiran worshiped Lord Shiva here. There are also stories that since there are three peaks on Rock Fort, occupied by three Gods Shiva, Parvathi & Vinayakar (Uchi Pillaiyar), the place was called Thiri-sikarapuram and later called Tirisirapuram. This place was also known as Sirappalli, Rishabachalam & Dhakshina Kailasam during ancient days.

As per legend, once there was a great tussle between Aadiseshan and the wind God Vaayu to determine who was more powerful. Aadiseshan encircled the Maha Meru hill (Himalaya) and challenged Vaayu to take Himalayas from him. Vaayu accepted defeat after failing to win the contest. It is said that during the fight, 3 pieces of the mountain broke off from the Himalayas with such force as to land at three different places. One of the three pieces is the Rock fort at Trichy. The other two are at Triconamalee (Sri Lanka) and Sri Kalahasthi (Andra Pradesh).

The Uchi Pillaiyar (also known as "Uchi Vinayakar") Temple is located on the peak of the Rock Fort hill. The shrine is at a height of 273 ft and has 400 steps from the base to the pinnacle. Sri Thayumanavar temple is located half way along the path to the peak. A panoramic view of the entire town of Trichy and the Srirangam Temple can be seen from the Uchi Vinayakar temple.

Rama having defeated Ravana, went back to Ayodhya with Sita, where he had is Pattabhishekam (coronation) as a king. Vibhishana (brother of Ravana) accompanied him on his way back to Ayodhya. After the celebrations, when Vibhishana wanted to return back to Lanka to take charge, Rama presented him with a Ranga Vimana to which he had been personally performing poojas until then. Rama on presenting the idol and Vimana, told Vibhishana to take it to Lanka and install it there with a condition that, on the way back, the idol must not be placed on the ground anywhere for whatsoever reason. Vibhishana agreed to this condition and having thanked Rama, proceeded towards Lanka.

While passing by the city of Thiruchi, Vibhishana was extremely fascinated by the beauty of the flow of the river Cauvery. He felt that it was the right place for him to have his bath and some rest before proceeding to Lanka. He looked around for some help to safeguard the Ranga Vimana until he finishes his bath. There was a small boy playing around in the banks of the Cauvery. Vibhishana handed over the Ranga Vimana to him and told him strictly not to place it on the ground till he comes back. The boy agreed and told him that he will call Vibhishana thrice and if he doesn't come back, he will keep it on the ground and go away.

Vibhishana went into the waters and was enjoying his bath in the river. The boy called him thrice but Vibhishana did not respond as he was in the water. The boy kept the idol on the ground and it started growing enormously. Vibhishana came back in a hurry. Seeing the Vimana on the ground, he tried to lift it but all his attempts failed. He got furious with the boy and went chasing after him. The boy ran to the hilltop and sat on the peak as he couldn't run further. Vibhishana knocked the boy on his head with anger. The boy revealed himself as Lord Vinayaka to Vibhishana. Vibhishana prayed to the lord and went back to Lanka leaving behind the Ranga on the banks of Cauvery.

It was Vinayaka's trick to retain Lord Ranga in Trichy, which is today's famous Srirangam Sri Ranganathaswamy Temple. And Lord Vinayaka who played tricks with Vibhishana, is worshiped as Uchi Pillaiyar at the hilltop. Even today one can see a wound on his head caused by the knock of Vibhishana. There is also a rock-cut cave near the temple. The path inside the cave leads to Woraiyur, which was one of the popular cities during ancient times. The temple and its surroundings is a wonderful getaway from the grinds of materialistic life.