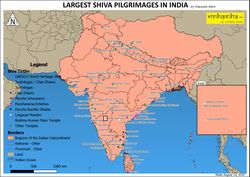 These are the most important Shiva temples for pilgrimages in India.

The excavations at Mohenjo-Daro and Harappa have revealed that the Śaiva tradition is the most ancient living faith in the world. Over the centuries, Śaivism developed many off-shoots and appeared in different forms resulting in a vast array of lineages and traditions, each with unique philosophic-cultural-linguistic characteristics.

Devotees of Lord Shiva range from those who hold on to Shiva with their simple faith and daily devotions, to earnest seekers of the highest Reality, who pursue the highly systematic doctrines and yogic practices of various branches of Śaivism. Like other Hindus, Shaivas have historically practiced bhakti, karma, and gyana yogas. For example, in the Shaiva Siddhanta sect specifically, the saints Appar, Sambandar, Sundarar, and Manikkavacakar represent the four pathways of charya (a form of bhakti), kriya (gyana), yoga and jnana respectively.[1] The Svetasvatara Upanishad and Shiva Rahasya Purana are perhaps the oldest scriptures which testify Shaiva beliefs.

While these are the major traditions, they do not comprehensively cover the breadth or depth of Shaivism.

The Saiva Agamas form the foundation and circumference of all the schools of Saivism. The system of philosophy set forth in the Agamas is common to a remarkable degree among all these schools of thought. These Agamas are theistic, that is, they all identify Siva as the Supreme Lord, immanent and transcendent, capable of accepting worship as the personal Lord and of being realized through yoga. This above all else is the connecting strand through all the schools.

All of the individual schools and lineages within Shaivism adhere to these doctrines. In fact, Saivism is not a single, hierarchical system, but a thousand traditions, great and small. Some are orthodox and pious, while others are iconoclastic and fiercely ascetic (like the Kapalikas and the Aghoris), eccentric or orgiastic. For some, Siva is the powerful, terrible, awesome destroyer, but for most He is love itself, compassionate and gentle.

For most people, Agamic philosophy and practices are conveyed primarily through four channels:

For nearly all of the millions of Siva's devotees, Saivism is not, therefore, a school or philosophy; it is life itself. To them Saivism means love of Siva, and they simply follow the venerable traditions of their family and community. These men and women worship in the temples and mark life's passages by holy sacraments. They go on pilgrimages, perform daily prayers, meditations and yogic disciplines. They sing holy hymns, share Puranic narratives and recite scriptural verses.