In Hinduism, there are five main commandments known as a the Panchavrata[1] or Panchashila, that are always the core forbearance. Regardless of any rules prescribed, they cannot conflict with these Five Precepts. These are the chief vows of Buddhism and Jainism as well. Not only are Hindus required to adhere to these five forbearances, but there are other vows which they are encouraged to keep. Hindus are also encouraged to commit to service to humanity which is known as Mānav Dharma. Example of these include “Oh Noble men! We do not commit violence. We do not hurt others. We do not quarrel either. We of course chant Vedas and act according to its dictates“[2] and the Atharva Veda declares, “Every man should protect the other in all respects“[3].

A Hindu's code of ethics is as high as that of any other civilized nation. 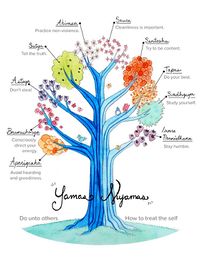 The Yamas (Panchavrata) and Niyamas

He knows that it is wrong to commit murder, adultery, theft, and perjury, and to covert and he honors his parents, in the case of the father at any rate, to a degree exceeding the customs of most nations, which have no ceremony resembling that of the Śrāddha.

Commandments have always been taught for the benefit of society. Following them avoids problems, such as murder and theft, or the results from lying and non-chastity. They have been written by saints from various regions. An example is the Kaya Siddhar Konkana Munu writing, "Do not harm the poor; if you do, you cannot rid yourself of the resultant sin."

It means 5 commandments. Hindus today submit to the Panchavrata or five major vows or commandments:

The following excerpt from the Ṛgveda[6][7] sums up the Panchavrata:

"Violence, womanizing, drinking liquor, gambling, stealing, falsehood or lying and association with those who commit these sins; one who commits any of these sins is a sinner."

It has 9 commandments. The lawgiver Kṛṣṇa gave the following precepts:

It has 10 commandments. In Manusmṛti ten aspects of general duties are mentioned. They are:

It has 5 commandments. Sage Yājñavalkya was a ṛṣi in the Vedic age and mentor of Rājā Janaka. The Yājñavalkya Smṛti[8][9]) prescribes the Panchavrata, apart from other moral codes.[10]

It has 10 commandments. Patanjali in his Yoga Sutras lists them to follow for a good or sinless livelihood.

It has 10 commandments. In the Mahā Purāṇam Śrimad Devî Bhāgavatam, Veda Vyāsa writes of achieving yoga or union with God by destroying the six enemies of yoga;

The six attributes can be destroyed by following Patanjali's commandments.[13]

It has 10 commandments. Mahaṛṣi Gautama was a lawgiver, and ascribed eight yamas.[14]

It has 30 commandments. The Śrimad Bhāgavatam[15] lays down the following customs to be practiced for a good human life.[16]

For the Rajanya (Kshatriya) it should be either death or victory in battle...He should not in battle kill one who is stunned, who has surrendered his arms, or is a fugitive, nor those of his enemies whom he has captured nor their wives or children. Whatever is acquired either by victory or treaty should be distributed amongst the soldiers in shares according to merit.[22]