Ketu literally means ‘that which is known from a distance’. 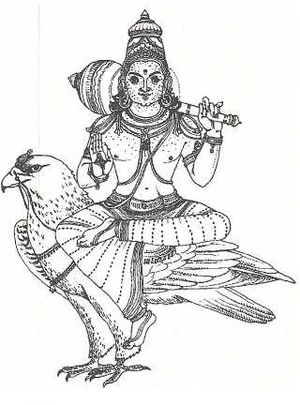 The first seven planets mentioned above are the guardian deities of the seven days of the week. The last two planets are actually the two ascending and descending nodes of the moon.

As per the accounts in the purāṇas, Rāhu was the son of Sirihikā and Kaśyapa. He was a demon. At the time of distribution of amṛta or nectar to the gods by Viṣṇu as Mohinī,[1] he had surreptitiously entered into the line of the gods. As soon as Viṣṇu discovered it, he cut off Rāhu’s head by his Sudarśana discus. Since then the head was named as ‘Rāhu’ and the body was named as ‘Ketu’. As per this version, Ketu is only the body of Rāhu. Hence he is shown like a serpent’s tail, whereas Rāhu is depicted only as a head.

In iconographical works Ketu has been depicted in several ways as follows: