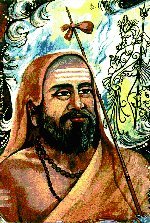 Sri Vidyaranya (Vidyāraṇya), the head of the Śṛṅgerī Pītha from 1380-1386 CE, was one of the foremost sages in the tradition of Advaita-Vedanta. He was instrumental in the establishment of the Vijayanagara empire that played a critical role in preserving the Dharma in southern India during the tumultuous medieval period.

Vidyaranya's younger brother was his predecessor as the head of the Śṛṅgerī Pītha, under the yogapaṭṭa of Bharati Krishna Tirtha (Bhāratī Kṛṣṇa Tīrtha). Under the leadership of the two great teachers, the Śṛṅgerī Pītha enjoyed a period of eminence with flourishing scholarship and spiritual attainment.

The two brothers were born in a poor Brāhmaṇa family near the present town of Warangal in Andhra Pradesh state in the early 1300s of the CE. The younger brother left home at an early age and was initiated into saṃnyāsa by the then head of the Śṛṅgerī Pītha, Sri Vidyashankara Tirtha (Vidyāsaṃkara Tīrtha). Mādhava (as Vidyāraṇya was known in his purvāśrama) followed in search of his brother and also became a saṃnyāsin.

Sri Vidyaranya was approached by the brothers Harihara Raya and Bukka Raya in 1336 CE for guidance. The brothers, sons of Sangama who was slain by the rulers of the Sultanate in Delhi, had been captured by the Sultan and imprisoned in Delhi. The Sultan sought to use them as warriors to quell rebellions in southern India. Seeing the opportunity, the brothers declared their independence and established their capital on the banks of the Tungabhadra river in what is now the state of Karnataka.

Under the guidance of Sri Vidyaranya, the brothers sought to establish a kingdom to preserve the Dharma. Harihara Raya, the elder brother, became the first king of the fledgling kingdom, soon to become one of the greatest empires in Indian history. The capital was initially named Vidyānagara in honour of the sage, but came to known as Vijayanagara in due course. Harihara Raya acknowledged Sri Vidyaranya as his guru and placed his imperial insignia at the latter's feet. Since then, the heads of the Śṛṅgerī Pītha have been known by the title "Karṇāṭaka siṃhāsana pratiṣṭhāpanācārya".

Sri Vidyaranya was a person of encyclopedic learning and authored several works on various topics connected to the Dharma. Many of these works were jointly authored by Vidyaranya and his predecessor Sri Bharati Krishna Tirtha. Some of his well known works include:


Pañcadaśī: A 15-chaptered work on Advaita-Vedanta and an exhaustive exposition of the system. One of the most well known works in the history of the tradition.

Jīvanmuktiviveka: "Inquiry into liberation while living", a work on Advaita-Vedanta directed mainly at saṃnyāsin-s. It is well known for its categorization of different levels of spiritual attainment and its emphasis on manonāśa (literally, "destruction of the mind") and vāsanākṣaya (sublation of mental impressions) for jīvanmukti (liberation while living).

Dṛk-dṛśya-viveka: "Inquiry into the nature of the seer and the seen", also called Vākyasudhā ("Nectar of speech"). This work is sometimes wrongly attributed to Adi Shankaracharya.

Upaniṣad-dīpikā-s: Short commentaries on the Aitareya and the Taittirīya Upaniṣad-s.

Srīvidyārṇava: A mantra-śāstra compendium aligned to the Srīvidyā tradition of Tantra.

Sarvadarśanasaṃgraha: An exposition of 16 philosophical traditions.

Mādhavīya-Śaṃkara-Digvijayam: A biography of Adi Shankaracharya.

Sri Vidyaranya is considered to have been one of the enlightened sages in the Advaita-Vedanta tradition, and a master of various branches of Dharmic learning including Yoga-śāstra, Mīmāṃsā, mantra-śāstra, Tantra and Dharma-śāstra.