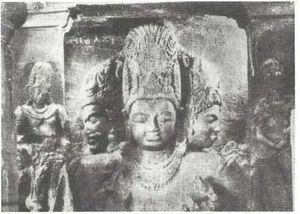 Elephanta is an island situated about 11 kilometers (7 miles) to the north east from the Bombay (now Mumbai) harbor. Its circumference is about 7 kilometers (4 miles).

Its original name was Śripuri or Ghārāpuri. It was attached to the Konkan region of Maharashtra. It was under the political control of several dynasties of kings like Western Cālukyas, Cālukyas under Pulakeśin II (CE 600), the Yādavas of Devagiri and so on, before coming under British rule in CE 1774.

The island got its name due to the idols of elephants which are now missing on the steps of one of the temples there. It is famous for its archaeological monuments especially the six cave temples belonging to the Śaiva sects assigned to the 8th century CE. Some of the characteristics of the biggest caves is: