“Hinduism’s basic tenet is that many roads exist by which men have pursued and still pursue their quest for the truth and that none has universal validity.” – Kenneth Scott Latourette

Samyag darshan ("Right worldview", "Proper viewpoint", "Correct insight", or "Rationality of perception") as opposed to mithya darshan ("improper viewpoint")[1] is required for attaining Moksha. It is recommended for Hindus to think objectively when it comes to the their outlook circumstances. Samyag darshan is the objective worldview. Objectivity is bias-free whereas subjectively is biased. Hence Objectivity, allows for an all-inclusive resolution. This is important because of the principle of vasudhaiva kutumbakam[2], which means "the whole world is one family." As such, in order for a family to function, it requires everyone play a part in its success for the present and future generations. Sathya Sai Baba proclaimed, "All is divine, all is God, and unity is divinity." Following this line of thought, aikatmyam is the principle of identifying with the entire universe, and it helps the self in thinking [and hence, living out] the vasudhaiva kutumbakam ideal. 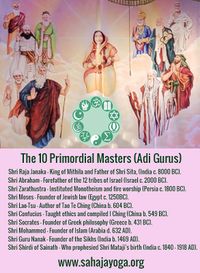 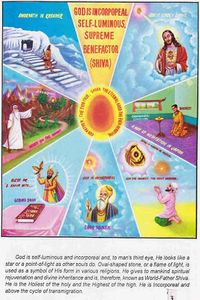 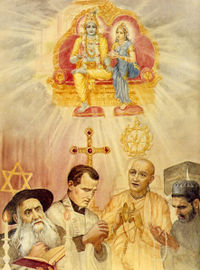 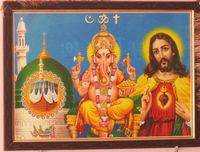 A frame from India encouraging unity of religions. 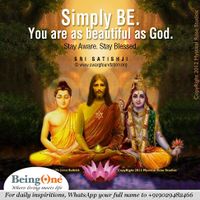 Samadarshan means "Equal viewpoint" or "Equal worldview." This idea is important in life so individuals can avoid bias and come to a mutually beneficial solution. It compares to the Jain Anekantavada ("non-one-sidedness.")

"This sarvatra samadarsana is the supreme ideal of Hinduism. This is the state of liberation or Moksha." - The Astrological Magazine[3]

Someone who thinks with this principle is a Samadarshi. The right worldview is required in order to obtain Moksha.[4][5]

The verse below is what ties the Samadarshan principle in with Loksangraha:

Further, the Jnana Sankalini Tantra gives 6 virtues for humans, and 1 of them includes uparati (indifferent outlook for worldly endeavours), which is along the lines of samadarshan.[6]

If Vasudhaiva Kutumbakam is true and must become a reality, then working towards it is a must. Loksangraha means “well-being of the world.”

Sarvabhutahita also means "working for the welfare of all humanity" and samya means "becoming one". 'Inclusivism' is a term invented by Paul Hacker in 1957 in his article titled "Tolerance and Intolerance in Hinduism," in which he portrays Hinduism as doctrinally tolerant and does not superimpose.[7] Antahkarana-shuddhi is the purity by being compassionate to all.[8]

“I am proud to belong to a religion which has taught the world both tolerance and universal acceptance. We believe not only in universal tolerance, but we accept all religions as true." - Swami Vivekanand[9]

As a result, Hindus tend to be very tolerant and Hindu societies have allowed other religions to develop in terms to building their institutions (i.e., worship halls, post-secondary institutes, political parties.) Sarva Dharma means, "All Religions and this concept has been preached by Hindus for social harmony. For example, Sarwa Dharma Mahavidyalaya and Sarwa Dharma Vidhi Mahavidhyalaya are post-secondaries while Sarva Dharma Sthal Temple is a worship hall for all religions, and Sarva Dharma Sammelan is a yearly summit of all religions in India. Swami Vivekānanda called the idea that "all religions are equal," Sarva Dharma Samabhava. Swami Shantatmanand called it Dharma Samanvaya, and the Ramakrishna Mission organization calls it Dharma Siwan Waya.

This process of 'purification' helps cleanse the mind, speech, and deeds. Sarvabhutatma-bhutatma also means antahkarana-shuddhi ("purity by being compassionate to all.") The Mahabharata elaborates this concept by stating, "Manasyekam vachasyekam karmanyekam mahatmanam" or "All are one; there is no disparity in ideas, expression and deeds, and he is a Mahatma who applies this concept."

Mahatma Gandhi would say, "See no evil. Hear no evil. Speak no evil." This statement ties into the principle of Trikarana Shuddhi.

"We are prostrating you (Rudra) with trikarana shuddhi."

"In consequence of what I have done to the Brahmanas in thought, word, and deed, I do not feel any pain now [even though I am lying on a bed of arrows]."[12]

They appear in at least one version of the Guru Gita[13]:

"With actions, speech, and thought, constantly strive to satisfy the guru. With sincerity, prostate before the guru and offer hull honor."

The Padma Purana says on Prahlada:

"He, of a delighted mind, never knew anyone else except the lord of gods in all conditions and deeds (done) with his mind, speech and body. The humble and very intelligent one stayed in his preceptor's house at a (proper) time."

In contrast, one who seeks to cause harm to others in mind, speech, and deed is a purvalodra.[14]

Quotes regarding self-restrain from Sanatan and other Arya teachers: