Yungdrung Bon, or Swastika Dharma, is a Hindu sect practiced mainly by Tibetan nationalities living within India, Nepal, Bhutan, and Tibet. Its other names are Drungmu Gyer in the ancient language of Olmo Lungring, Swastika Dharma in Sanskrit, and Grags-pa Bon-lugs, Bonpo or simply Bon in Tibetan as variants of Yungrung Bon. An adherent of Bonpo is a Bonpa. Tonpa Shenrab was a sage who had popularized the religion. According to scriptures, he had taken avatar as Shenrab to teach humanity how to achieve Moksha.

"According to the teaching of Tonpa Shenrab, the world was created by means of emanation, but in its duality, that is, light-darkness, day-night, male-female, good-evil." - Andrew Woznicki[1]

This material universe is the Exterior Reality (phyi snod) while Inner Reality (bcud) is the pure spiritual realm. The dualistic onto-metaphysical principle for the process of existence is classed as Being (yod-pa) and Non-Being (med-pa.)[2] Bon explains that this dualism keeps all things in cosmic harmony.

The gods of the four seasons working for the welfare of gods, humans, and nagas, are believed to have come from the blood, flesh, heat, and breath of Shenrab.[3]

Bon's Supreme God is Kuntu Sangpo, who created the universe from a lump of slime and created creatures from an egg.[4] The Supreme God in Bon is written of as "Yang dar rgyal po" meaning that he was present when there is nothing in the universe. Other phrases include "sNang ba 'od ldan", "Kun snang khyab pa", and "Khri khug rgyal po."

Thus, Bonpo proposes that the universe responds to the needs of the disciples. For example, if the Bon teachings are in a state of danger, the universe will respond by sending forth a Buddha for the welfare of humanity.

The Lubum Trawo reason that a serpent goddess, named Queen of the Water Spirits, of cosmic length created the physical, biological, and divine constructs of the universe out of her body.[6] From her nostrils originated the various types of life-nourishing winds. From her blood came the 5 oceans and from her nerve channels came water courses. The light from her flesh created the earth. Animals originated from her limbs. Night and day came from her back and front. The spirit world came out of the light from her organs.

There are a few tales stating that universe originated from an egg or eggs. The oldest myth is that the entire universe arose from an egg. In another myth there were 2 eggs, 1 luminous and the other of darkness. From the light one arose an Illuminating Resplendence being (Kuntu Sangpo, an avatar of Trigyal Khugpa), while from the other came King of the Negative Realm (Kalpa Medbum Nagpo or Munpa Zerden)[7], and this king created Tong Zham Nangmo out of his own shadow. From these 2 originated the good and evil attributes of the universe. Then of 3 eggs the Muchoi Tromdur mentions there was a white, copper, and black egg. From then came gods and humans.

Tenzin Namdak Rinpoche, senior teacher of the Bon religion in exile, with his Holiness the Dalai Lama.

Like Buddhism and Jainism, Bonpo recognizes Jewels of Refuge (Skyabs gNas bZhi.) However, usually the Bon tradition names 4 instead of 3 (dKon mChog gSum .)[9]

Above, numbers 1, 2, and 3 correspond to the Buddhist jewels of refuge Buddha, Dharma, and Sangha. Bonpas have added the Master or Guru as another jewel to depend on for learning spirituality.

Each sentient being has 2 types of seeds that are kept in their kunzhi namshe or alaya. If a human engages in positive causes, this leads to the release of suffering. If though, a human meets negative causes, it leads to staying in Samsara.[11]

A religion for the world[edit]

The Menri Monastery in Dolanji, Himachal Pradesh. His Holiness the 33rd Menri Trizin, is the spiritual head of the worldwide Bon community, resides here.

A fair number of Bon temples exist in parts of India, Tibet, Nepal, Bhutan, and some western countries.

Although Bonpo remains mainly practiced by Tibetan nationalities, and some Indians and Chinese, it was intended to be a dharma to which everyone can learn from and apply towards Moksha, just like other Hindu sects.

Bonpas preached the philosophy to various countries and an annual summit of practitioners commenced in a famous cave temple. According to scriptures, Shenrab, like ascetic Rishabha, traveled other kingdoms outside of India. He even went to China and taught the Chinese Bonpo Legtang Mangpo. Other missionaries of Bonpo had also traveled in different countries to teach the doctrine. Namse Chyitol.g of the Gilgistan is accredited with having converted King Seve Salbar of Afghanistan to Yungdrung Bon.

"Among the countries to the north and south of Jambu Island, the places where the teacher pressed down with His feet on the earth, with His actual body are the following: China, Tanguts, India, Nepal, O-rgyan, Za-hor, Kashmir, Turkharistan, Khotan, Ta-zig, Zhang Zhung, Mon-yul, Khitan, Phrom, Gesar, Bru-sa, Qarluq, Uighur, and Tibet." - dBra-ston[12]

The gSang-sngags Rdzong-'phrang Nyi-'od rGyan by Thu'u-kbwan was a book of notes from a summit between Bonpas of countries of Olmo Lungring, sub-Himalayan India, Tibet, China, Turkharistan, and some others. The summit's would always take place in a cave named Mang-mkhar lCang-phrang. Cave temples or cave monasteries were very popular throughout Hindu history. (Even today pilgrimages continue to them.)

A popular missionary of Bonpo was gShen-chen kLu-dga. He was a descendant of Shenrab's lineage in the dMu-tsha clan.[14] gShen-chen was requested to send Bon scriptures.

Many Bonpa clergy were well connected with nationalities both within and outside of India. One can see Bonpo influence and interactions with the world in the story of King Srong-btsan sGam-po. He maintained relations with royalties outside of the Subcontinent. The king took Princess Lig-tig-sman from Zhang Zhung as his wife and she brought with her a Zhang Zhung image of Lord Shenrab when he was age 1, from the Temple of dKar-nag bKra-gsal in Olmo Lungring, and for that image was built the Them-chen Temple in Tibet. From Nepal he married Princess Khri-btsun and she had brought with her a Nepali silver image of Byams-pa 'Khor-lo for which was built the Temple of Ra-sa in Tibet. He also married Chinese Prinecss Kong-co and she had brought a Chinese image of Shenrab at the age of 9 for which was built the Temple of Ra-mo-che. The king had invited a monk from Sub-Himalayan India, Akarashilamati, who had brought with him a sandal-wood self-created image of Shenrab, and for it was built the bCu-gcig-zhal Temple in Lhasa. 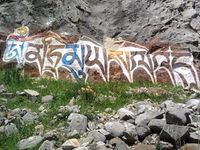 The Ma Tri Du Mantra painted on a cliff face in Tibet.

Om Ma tri Mu Ye Sa Le Du is its chief mantra, and is the hymn of compassion.

Bonpas worship both Buddhas and demigods.

The most important god in Bon, considered prime even over Guru Shenrab, is a primordial Buddha named Kuntu Sangpo, or All Goodness, who is in a constant state of fulfillment (Nirvana.) Having created the universe he is considered the Supreme God.

Gods are known as the lha. There are 3 categories of lha, the highest of which are the Buddhas, next the Bodhisattvas, and finally the Dra-lhas (Sky-gods), the last of whom are always in conflict with the hDre (demons.)[15] Apart from gods, some Bonpo practitioners are also said to have had access to the divine. For example, King Tho-tho-ri sNyan-shal is believed to have been given Bon teachings from heaven, according to the Byams-ma.

Apart from there, some mainstream deities are sometimes mentioned in Bonpa scriptures, such as Brahmā and Indra.

Almost as important than the Buddhas, are the Bodhisattvas, known in Tibetan as Yungdrung Sems-dpa's which translates in Sanskrit as Swastikasattvikas, meaning Swastika-beings[17].)

Each resides in a different paradise.


Protectors of the Word (bKa'-skyong)

Classification of other supernatural beings

Mainstream Devas
Brahmā in other sects

Garudas and Nagas are commonly mentioned in scriptures.

Shenrab's divine words (bKa) of Bon Gyi Thengpa Rempa Ga has the power to develop spirituality of the followers of Bonpo in a threefold way[19]:

Bonpa scriptures are divided into 2 major groups; Kanjur and Katen. The prior are the words of Shenrab himself, while the latter are dependent on the Kanjur.

The Kanjur itself consists of 4 categories of scriptures; mDo, 'Bum, rGyud, and mDzod.

"Bon was not a sinister perversion of Buddhism, but rather an eclectic tradition which, unlike Buddhism in Tibet, insisted on accentuating rather than denying its pre-Buddhist elements." - M. Alejandro Chaoutl-Reich[20], Ph.D.

Historically the two spiritual traditions of Tibet have been Grags-pa Bon-lugs (Bonpo) and gSans-ba Chos-lugs (Buddhism) and normally Buddhism played a role in the lives of most Bonpas since its introduction to them. Except for 2 kings noted in the rGyal-rabs gSal-ba'i Me-long, the interaction betwween Bon and Chos have been friendly for the most part.[21]

According to the 'Dul ba rgyug drug, the succession of Shenrab's monastic institution succeeded in the order below. The rTsa rgyud nyi sgron confirms that this lineage began in the time of the transmission of the 'Dul ba rgyug drug by Shenrab, and lasted until the era of rule of the 8th Tibetan emperor, Gri-rum bTsan-po.